September 3rd: This page is being built to document the many issues I’ve had with Geyer GU-115 along with communication failures and lack of accountability. I sent an email to Bob Rosenthal of DFW Piano Gallery 2 weeks ago (August 20th, 2021) with no response yet hoping to start a line of communication.

The piano sale/delivery took place in late January 2019, it went just fine and we were able to get our new Geyer upright setup in our new house in Bastrop with no issues. We waited a few months to do any kind of piano tuning to let it settle. I researched for technicians and was able to find a registered tech who also works at UT-Austin (Ollin Chavez). In his first visit, he noticed quite a few bent hammer springs. (SEE EXHIBIT A) Both of my technicians have said that this was either a dealer or manufacture issue that was missed in inspection process. My tech also said that this piano had not been regulated to manufacturer specifications and not even regulated at all at the Dealer – DFW Piano Gallery. 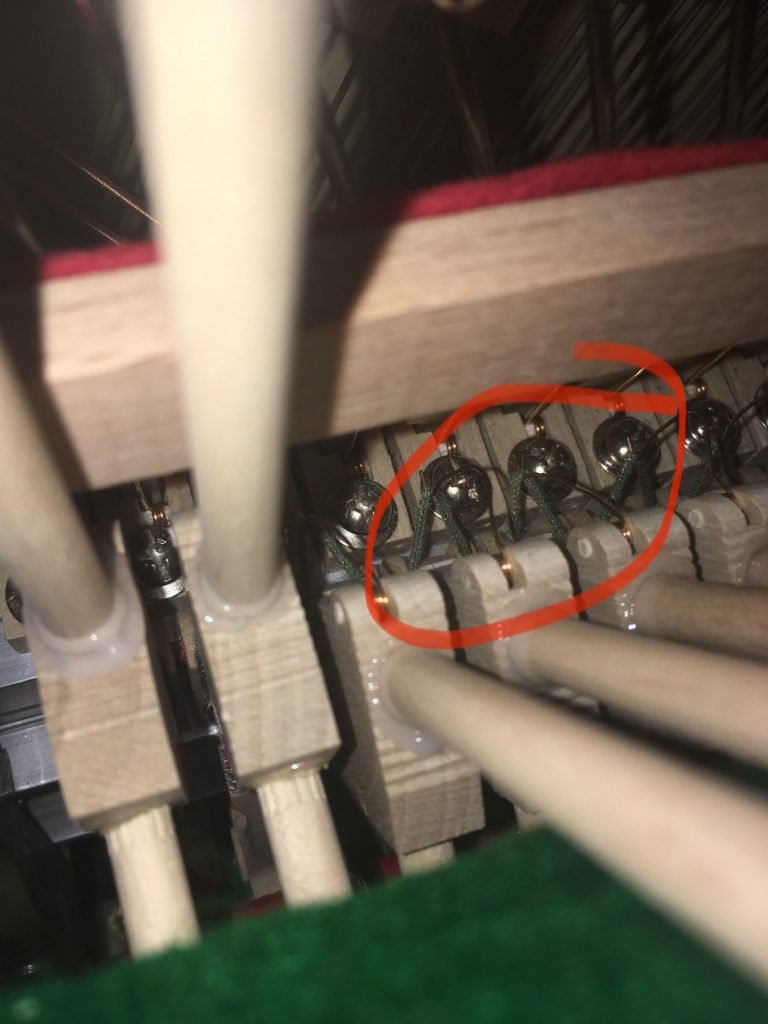 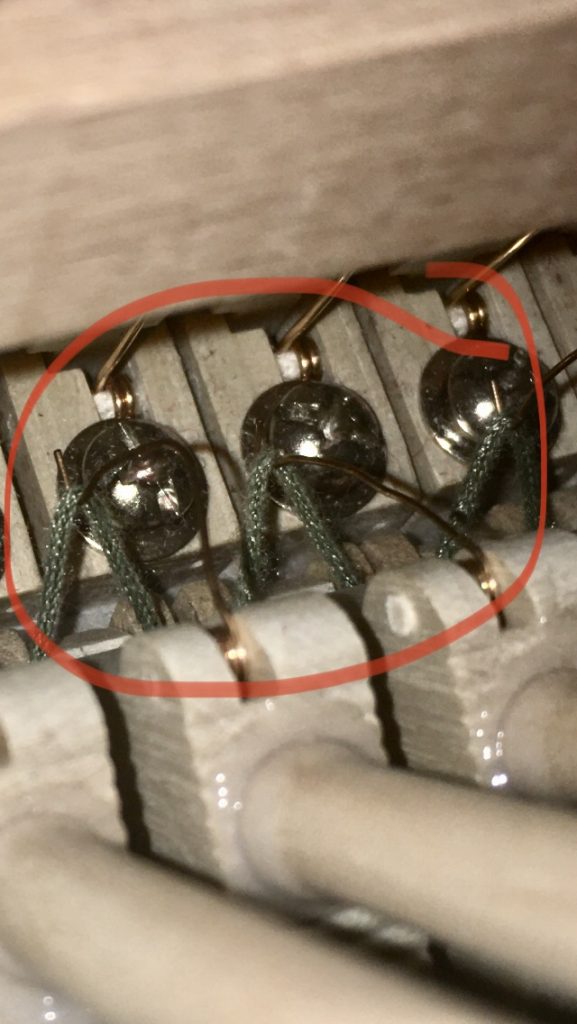 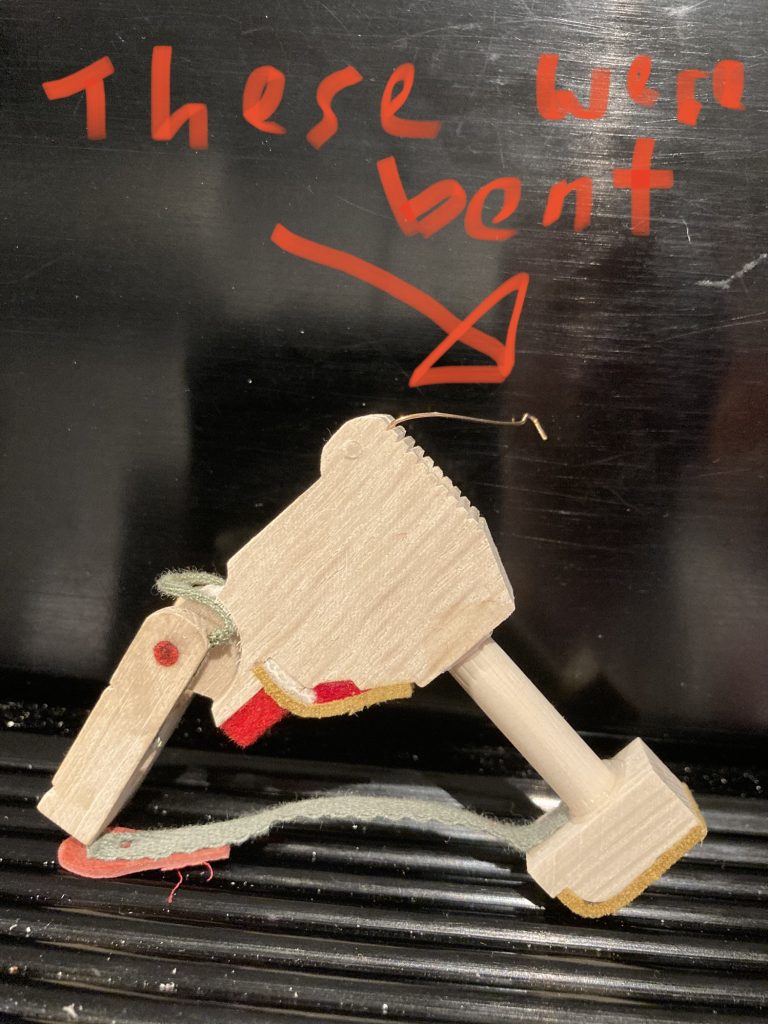 I then contacted Geyer via website & email. It took many months before a response and finally was able to reach Scott Sheback, the US rep, in September. He then emailed on Feb 5th 2020 that he had received the parts needed for the piano. We are now one year into communications. I received the parts later that month but received no directions in how to handle the repair as we were waiting on a work order approval to take care of labor costs. I then sent another followup in May…no response. Then another followup email on August 8th 2020, to which I finally received a response. Then Scott said he had not received communications from my tech, however my tech told me he had been trying to reach him by text & phone. My tech needed reassurance on being paid for the work. Then several of my keys starting sticking and having some weird harmonic issues around this time. Then, my tech was finally able to replaced the components in September 2020 to resolve the bent springs. 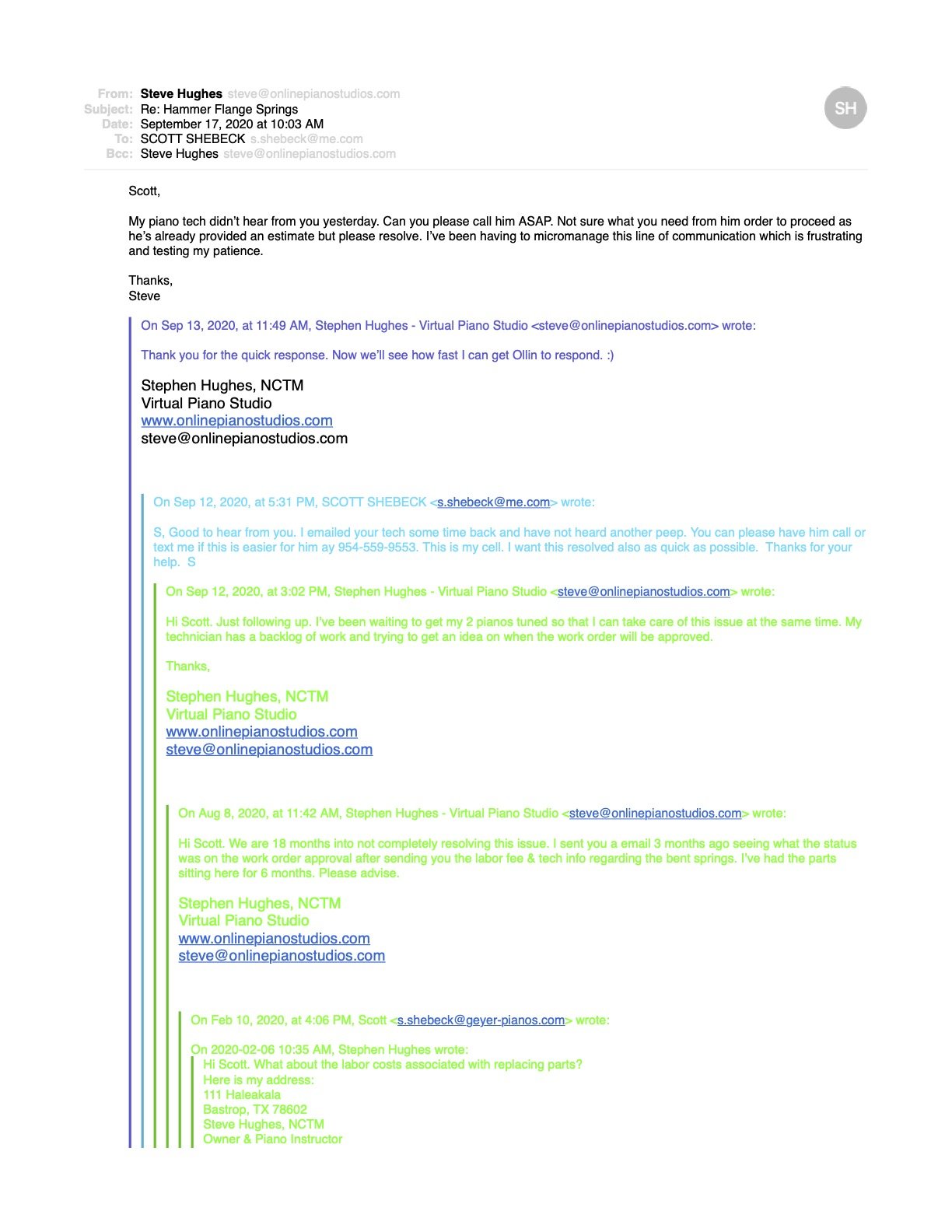 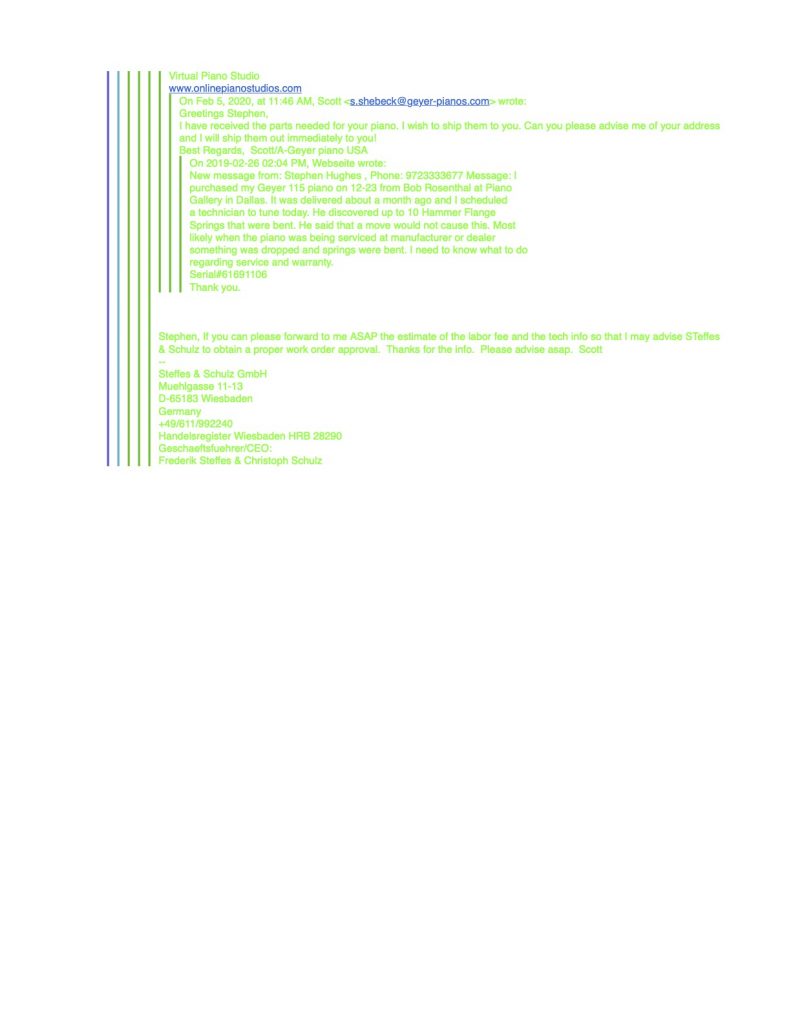 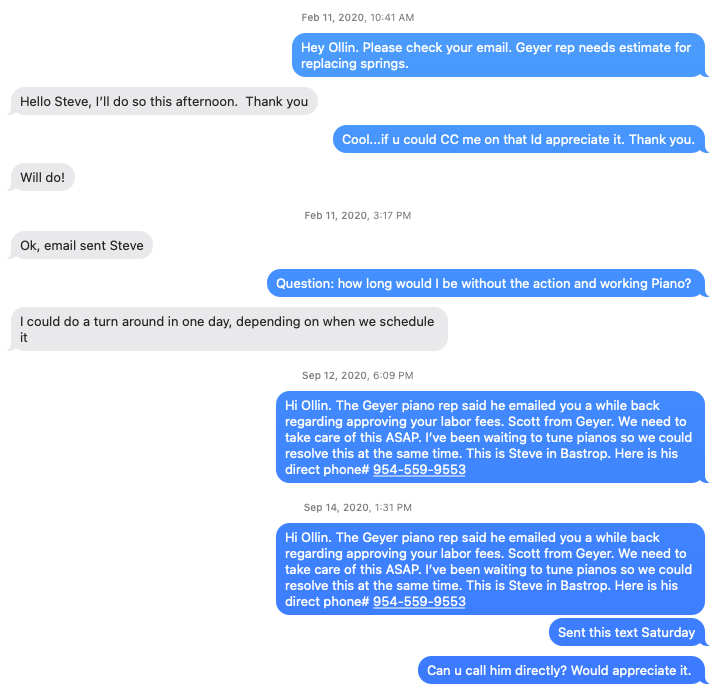 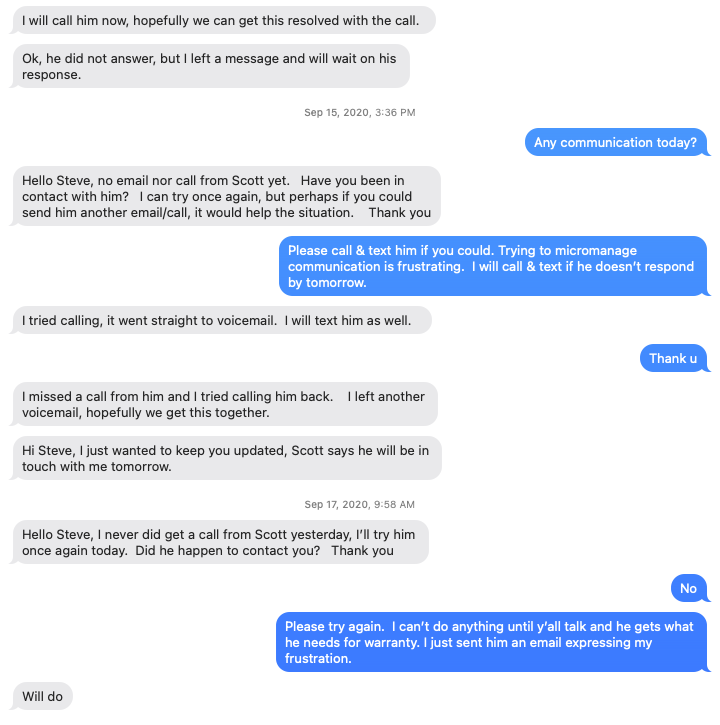 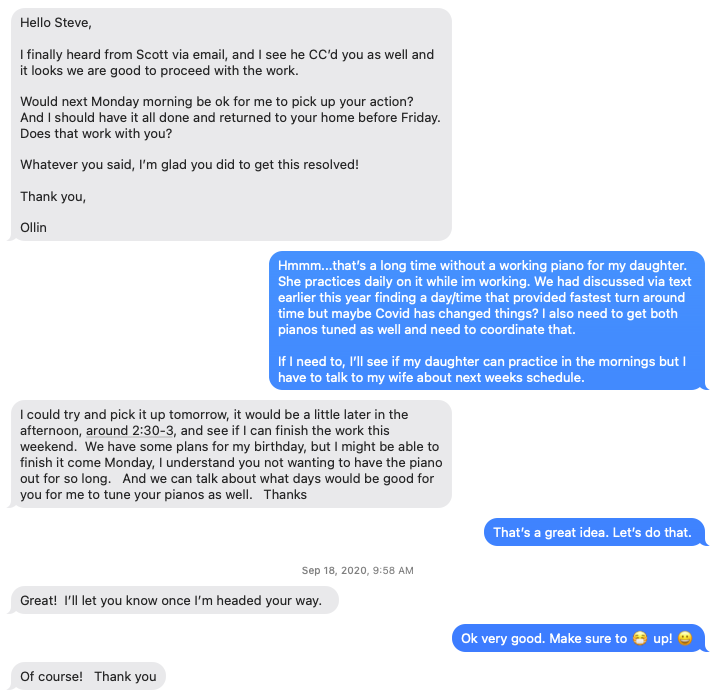 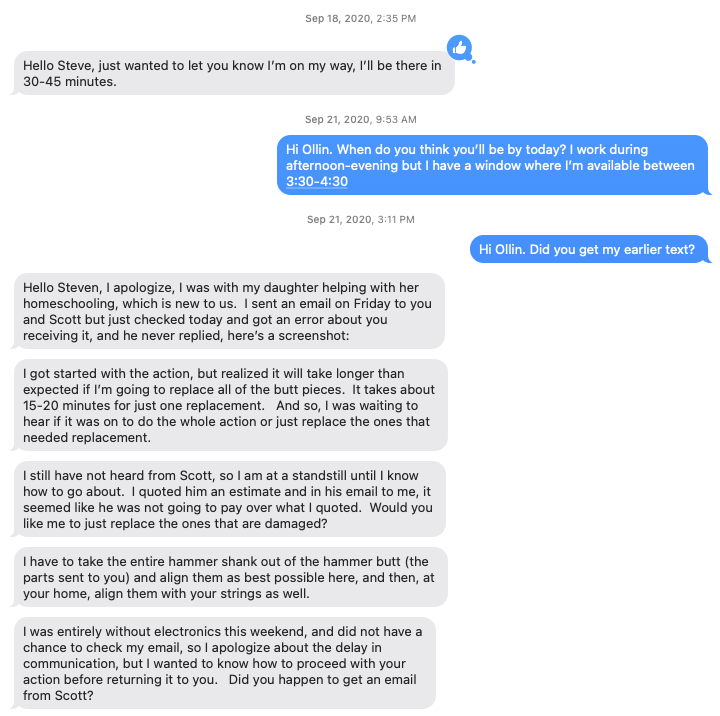 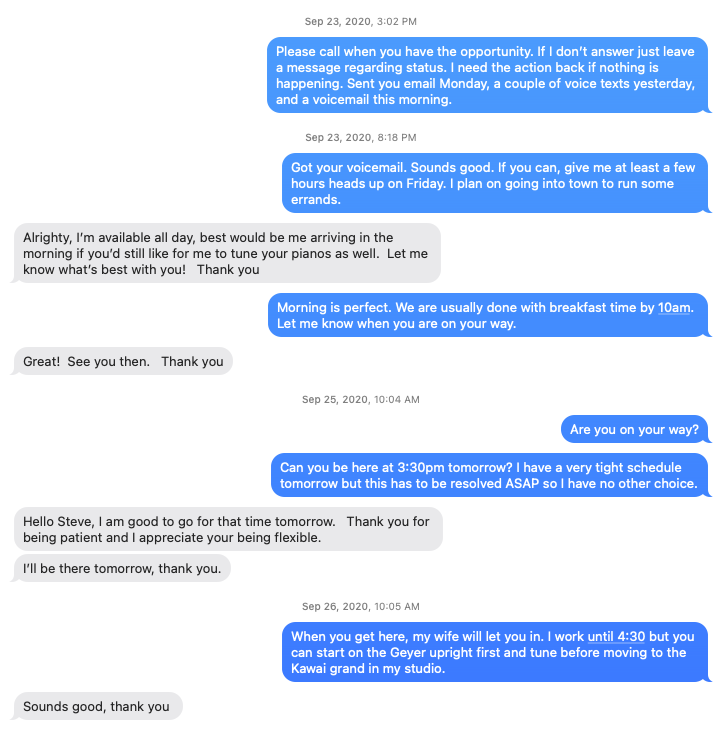 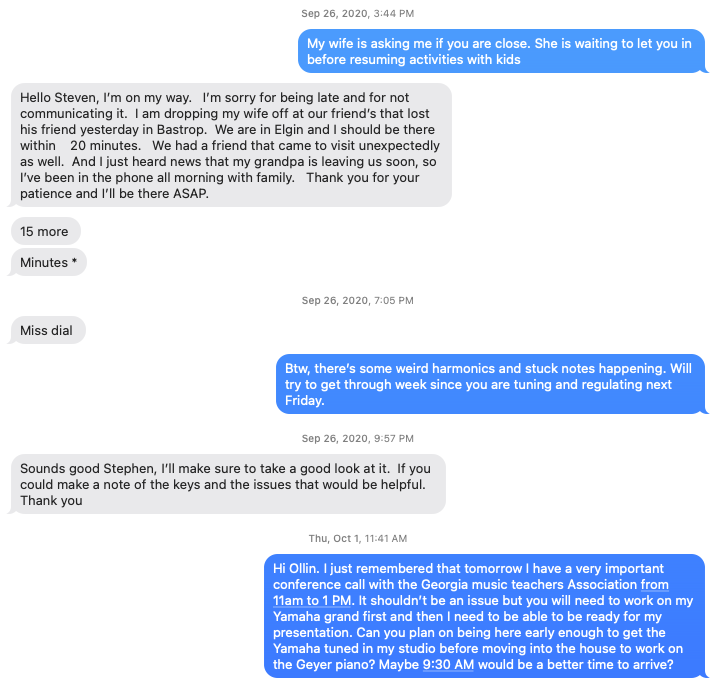 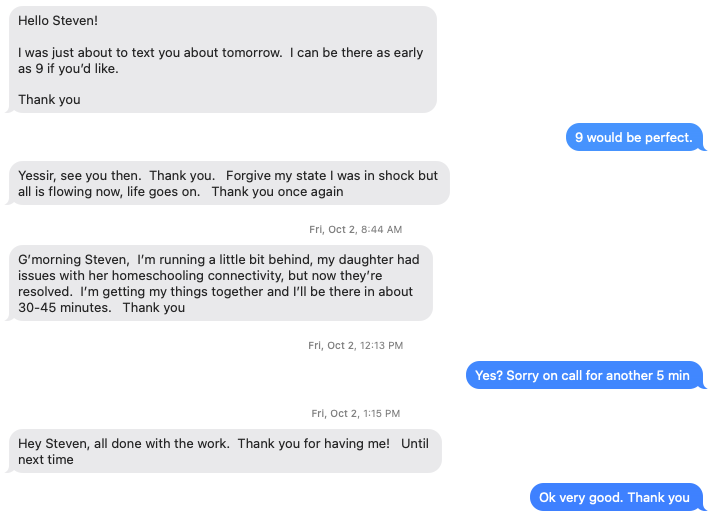 In February 2021, several of my hammers started to ‘bobble’. This was an issue that puzzled my tech and never got fixed until June (see below). My tech (Ollin) never got compensated for the work (as far as I know) and Scott pretty much ghosted him…never returning phone calls or emails. As a result, Ollin started to flake out on me I’m assuming because he didn’t want to deal with my piano, Geyer, the whole mess. This put extra stress on me on another level. Now it’s Spring of this year 2021. I had to find a new tech, which is now costing me more money per visit (because the only qualified techs live an hour away). It’s an hour from Austin to Bastrop and there are very few registered experienced techs in between.

During this time, another issue came up with the piano. Numerous keys starting sticking and the let-off on the action became very slow. This accelerated my search for a new tech and I hired Jeff Farris, who is one of the most experienced & sought after (& expensive) piano techs in Austin.

In his first visit on June 21st 2001, he made adjustments to the action and his conclusion (like Ollin) was that this piano had never been regulated to manufacturer specifications…maybe not even regulated at all! He noticed the key alignment was off as well. Then he noticed that D3 hammer was starting to wobble left & right. Since he was having to fix the action, tune the piano, and tune my other piano (Kawai grand), he didn’t have time to fix it then (due to our schedule). We then rescheduled him to come back out…but 5 weeks out due to his busy schedule.

So then a few weeks later, my daughter (who plays at least an hour on most days) noticed that C#3 wouldn’t play. I looked inside and the hammer (D3) was completely off (broken) and blocking the C#3. I just left it as is and had my daughter just use the upper register on the piano for her practice.

Jeff Farris (tech) came out for a 2nd service on August 20th, 2021. The hammer had a split birds eye on hammer butt (this is what’s on invoice) and he was able to repair it. He said it could last a few years or a few months…just depends on how it holds. He also stated that this was a previous issue as he’s never seen a new hammer have a crack like this.

Today, as I put together this page, which is taking me about 3 hours, I have ANOTHER ISSUE. The D3 hammer is now wobbly and seems to be out of position…unplayable. I was just quoted $150 to repair this issue.

I am very disappointed in the quality of the instrument and have never had any of these issues on any piano I’ve owned or taught on. There’s obviously major quality control issues here (either manufacturer, store, or both) along with communication issues which has strung this out so long before I’ve just gotten fed up with this.

See Exhibit D for pics/video of the newer issues I’ve been having
See Exhibit E for my communication with the tech, Jeff Farris
See Exhibit F for the Money I have spent towards fixing issues so far this year 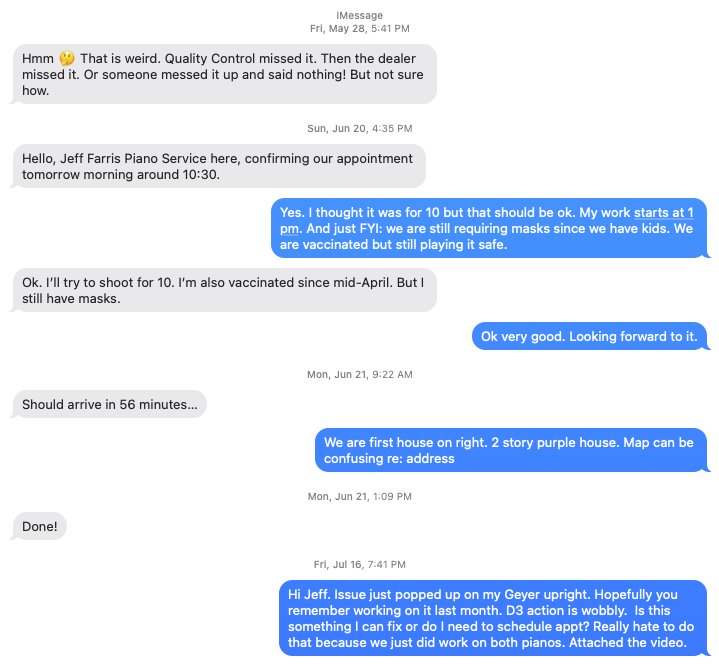 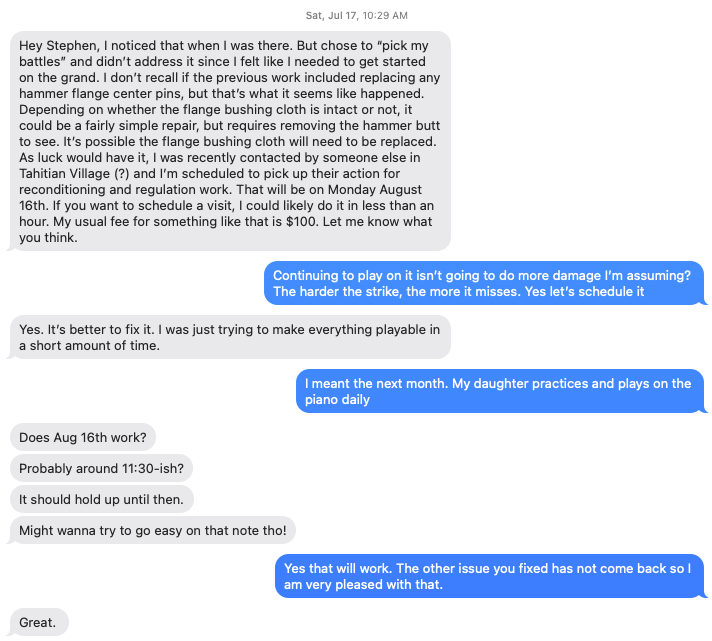 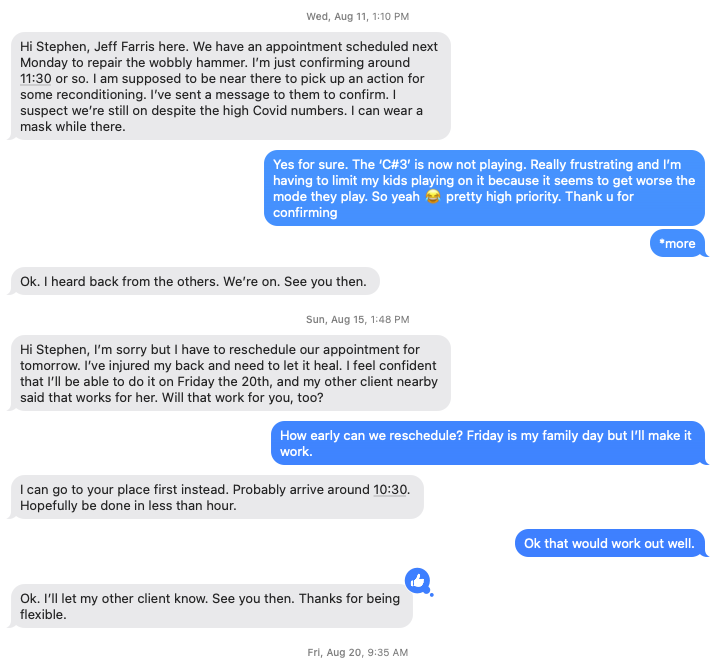 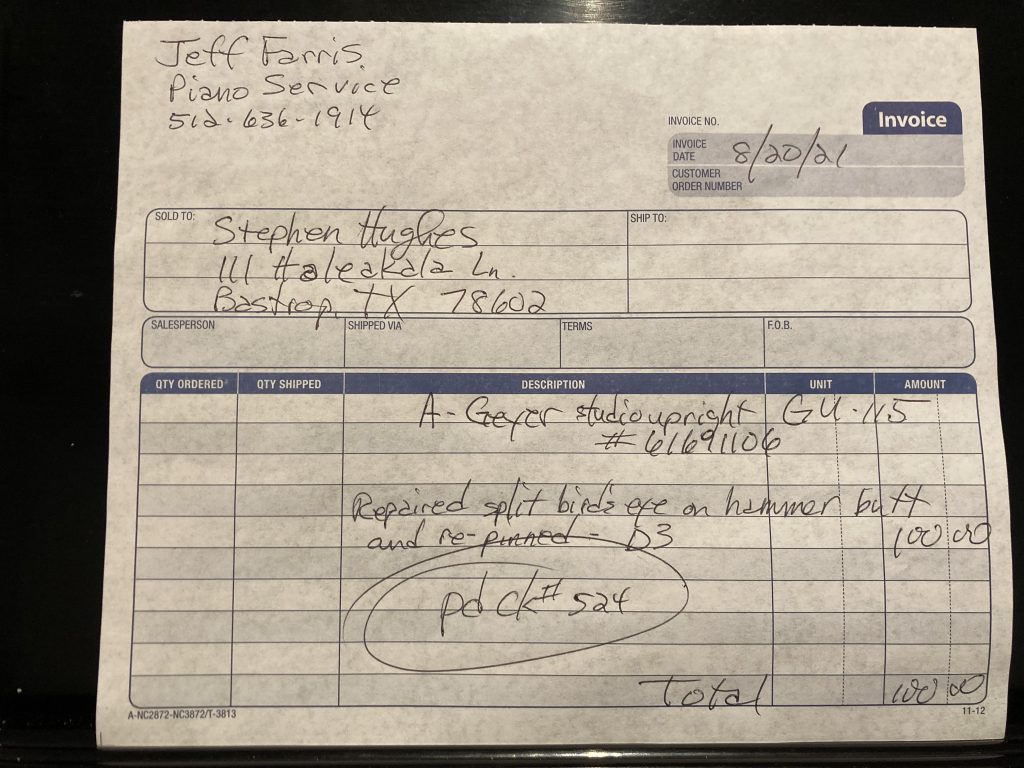 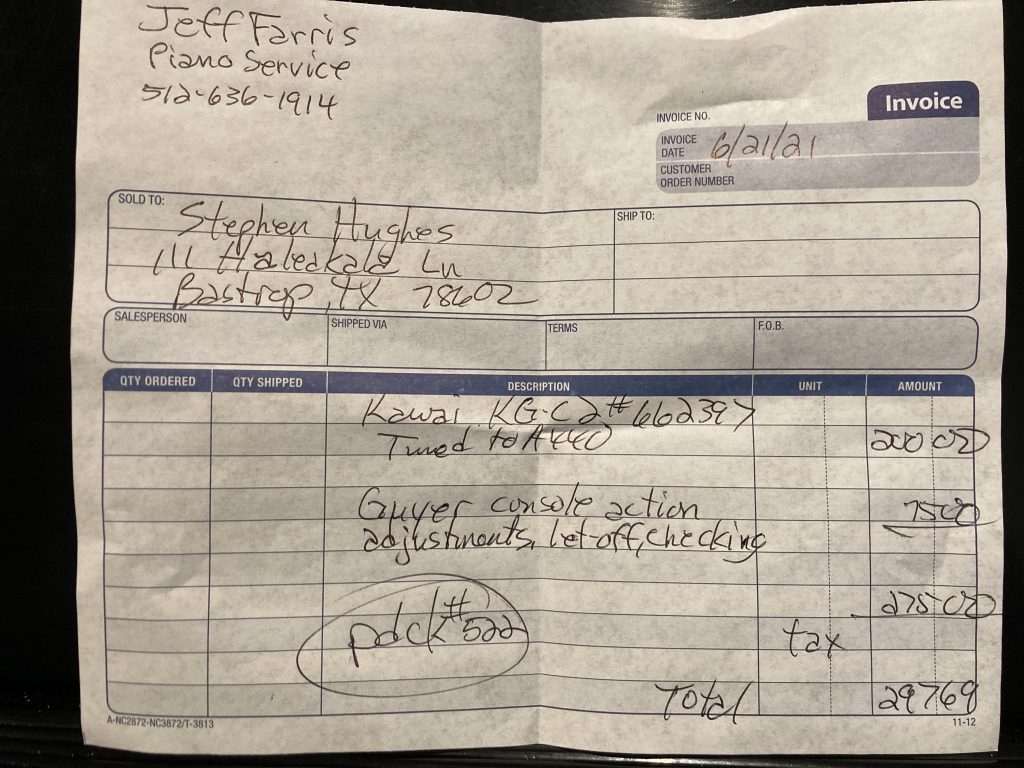